It’s confirmed then.  Anguilla lost both of their CONCACAF zone playoff matches with Nicaragua to consign themselves to a drop to the foot of the next world rankings table and the unwanted label as the worst national team in the world.

The first leg was away in the Dennis Martinez National Stadium in Managua, where the hosts, sitting at 175th in the world rankings, made short work of the islanders.  It took only twelve minutes for Luis Galeano to break the deadlock, and by half-time it was a comfortable 4-0., with the match and the tie effectively over already.  That first leg ended 5-0, which was something of a small comfort for Anguilla who mist has feared a more brutal beating. END_OF_DOCUMENT_TOKEN_TO_BE_REPLACED 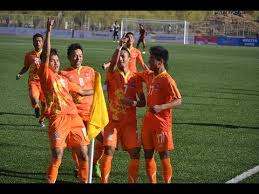 Oh my word.  It doesn’t rain, it pours.  Bhutan’s World Cup record now stands at a magnificent two wins out of two matches played all-time, still a 100% record.  Two goals from defender Chencho Gyeltshen, the second of which came as the match reached stoppage time in a dramatic conclusion, has seen Bhutan knock Sri Lanka out of the World Cup and qualify for the first group stage of Asian qualifying.  There they will come up against four other teams, with their seeded opponent potentially being one of Asia’s real powers: Japan, Australia, South Korea or Iran.  I’m giddy at the prospect. END_OF_DOCUMENT_TOKEN_TO_BE_REPLACED

After their seismic and historic victory in the first leg last Thursday, Bhutan’s soon-to-be no longer worst in the world national team take on Sri Lanka again in the second leg for a place in the first group stage of Asian World Cup qualifying.  They bring a 1-0 lead with them from the away leg in Colombo and will be defending a couple of 100% records in the return match.

Bhutan, having never played in the World Cup before last week, have won all (just the one) of their World Cup matches in history – the only country in the world who can claim that!  They do also have a 100% record at their home ground in Thimpu in official international fixtures having won all three of their previous FIFA sanctioned home matches.

END_OF_DOCUMENT_TOKEN_TO_BE_REPLACED

As if San Marino’s stunning draw last November weren’t unlikely and exciting enough for us here at the Worst in the World, now the sole remaining last-placed team have only gone and won.  Bhutan now have the only 100% record in World Cup football history, having played once and won once.  Not a bad World Cup debut by any stretch of the imagination, and even more so for the team ranked as the worst in the world.

The historic goal came from midfielder Tshering Dorji eight minutes from time, to grab a fabulous victory and leave Bhutan in with a real chance of progressing through to the second round where the likes of Japan, Australia and South Korea could await.  That scary thought can wait for another day though as there is the small matter of the second leg to negotiate – I’m just getting a little carried away.  But having secured this win, and a nice away goal with it, Bhutan must feel confident ahead of facing Sri Lanka back in the high altitude and cooler temperatures of Thimpu.

END_OF_DOCUMENT_TOKEN_TO_BE_REPLACED

Bhutan begin their first ever World Cup campaign on Thursday with an away match against a Sri Lanka side ranked 36 places above them.  Coming down from the high Himalayas, they Druk XI will have to adapt not only to a higher ranked opposition, but also to being rather lower at sea level in Sri Lanka’s palm-fringed coastal capital.  It will also likely be rather warmer than they are used to.

In a bid to acclimatise, Bhutan have spent the build-up at a training camp in Thailand where temperatures have hit 38 degrees. “We have made good use of the time we had, spending a couple of weeks in Bangkok, that has really helped us to adapt to the weather and the heat,” Bhutan’s skipper Karma Shedrup Tshering (pictured below) said on YouTube. “We are expecting to win, but you never know in the game of football so we just go there, give our best,” added the 28-year-old midfielder.

In an attempt to make the national team a bit more competitive, the Bhutan Football Federation have begin paying a few of the players a monthly fee of around US$160, or 10,000 ngultrum, while the rest of the squad are either students or are holding down other jobs.  There is one professional player, striker Chencho Gyeltshen, who currently plays in Thailand for Buriram United. END_OF_DOCUMENT_TOKEN_TO_BE_REPLACED