A lack of action on the field for our group of unfortunates hasn’t meant there is nothing to report from a Worst in the World perspective. On the contrary, that lack of action means that all seven teams currently ranked at the foot of the world rankings. have been steadily clocking up additional months in that position. As a consequence each nation is climbing up the all-time worst in the world rankings.

For the uninitiated, this list doesn’t imply that the current worst teams are any better or worse than their predecessors on the field – they have all spent time as officially the worst national teams in the world after all. What it does do, however, is log how many published world rankings each nation sat at the bottom of. And this current lack of action for certainly six of the seven nations means they are adding to their tally significantly.

Here’s a brief rundown of what this all means for each of our worst in the world nations. END_OF_DOCUMENT_TOKEN_TO_BE_REPLACED 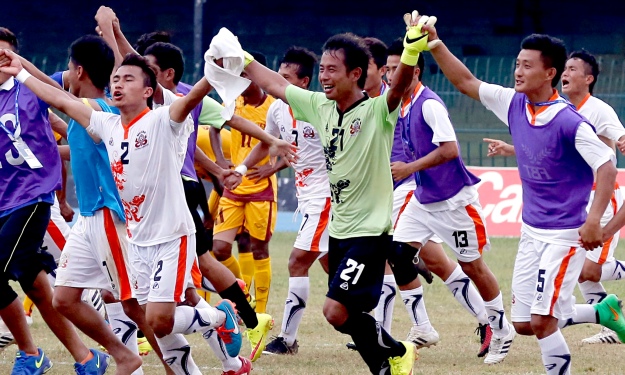 2015 may not have been a year of many Worst in the World matches but it has seen a raft of changes to those struggling at the wrong end of the FIFA rankings. The year began with just Bhutan cut adrift from the other 208 members of FIFA as the lone, and therefore undisputed, worst national team in the world, with no ranking points and little hope. END_OF_DOCUMENT_TOKEN_TO_BE_REPLACED

The Polynesian islanders of Tonga have never before featured at the bottom of the FIFA world rankings, though they have more than once had a bearing on matters relating to the worst in the world.

Back in the Oceania zone qualifying rounds for the 2002 World Cup, Tonga were pitched into an opening group with the regional might of Australia, among a few other Pacific island nations. Tonga suffered the ignominy of a world record defeat for an international match, going down 22-0 to the rampant Socceroos. END_OF_DOCUMENT_TOKEN_TO_BE_REPLACED 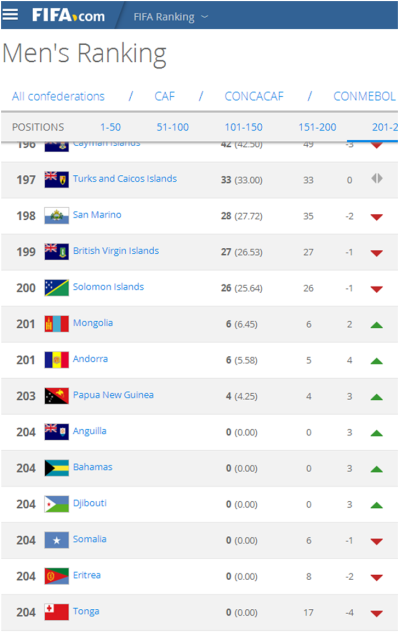 The release of a new set of FIFA world rankings is often a predictable day for the Worst in the World club. Frequently it’s merely a case of confirming another month added on to the tally of those stuck stranded at the bottom of the world. There is the occasional glorious escape confirmed, and the odd descent to the lowest rung decided. END_OF_DOCUMENT_TOKEN_TO_BE_REPLACED

By this point they were beyond even humiliation. The bedraggled and deflated American Samoan team stood in a line, their baggy shirts flapping in the light evening breeze. With arms around each other’s shoulders they faced the appreciative Australian crowd and sang, in spite of the tears welling up in many of the players’ eyes. It was a song of pride, of defiance, of home. But home must have felt a long way off for the youthful squad who had just become world news, and not in a good way.

‘After the game we walked into the locker room, I bowed my head down and I cried a little bit,’ the goalkeeper Nicky Salapu recalled years later. ‘I felt very embarrassed and like I don’t want to play soccer anymore.’ END_OF_DOCUMENT_TOKEN_TO_BE_REPLACED 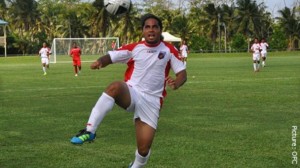 The latest FIFA World Rankings have been released, and naturally they confirm the rise of Samoa and American Samoa from the foot of the ranking table after both recorded wins in the recent Oceania World Cup qualifying group. END_OF_DOCUMENT_TOKEN_TO_BE_REPLACED

Samoa won the battle of the two Samoas, and also the Oceania World Cup Round One group, with a last minute Silao Malo goal to win 1-0.

It was also of course an almost unprecedented meeting of two current bottom ranked nations, although both had done plenty in their previous two matches to ensure neither of them are bottom any more. END_OF_DOCUMENT_TOKEN_TO_BE_REPLACED

The Worst in the World
Blog at WordPress.com.