Djibouti rounded off what has been something of a miserable season for their national football team with a three goal defeat at home to the genuine African power of Tunisia. When you look at it that way, a 3-0 defeat isn’t all that bad considering Djibouti’s lowly status. But it must also be noted that Tunisia were far from full-strength in this hot, dusty, and generally non-competitive African Cup of Nations qualifier in Djibouti City.

It was a tale of sloppy, and amateurish defending for all three of Tunisia’s goals as the sky blue and white striped Djibouti players chased shadows for much of this encounter.

Just before the interval, Tunisia made it 2-0 with a quickly taken free-kick on their left catching Djibouti unawares. A fine cross found Hamdi Harbaoui unmarked, and he headed home to extend the lead.

Shortly after the break it was 3-0 with another lofted pass leading to Taha Khenissi finishing off the scoring, with the noticeably physically inferior home players struggling to plug the gaps.

Djibouti had made some progress in this match, with a few promising attacks that ultimately led to nothing. Most exciting from a Djibouti perspective was a free-kick from within the penalty area giving a terrific opportunity for a goal – and indeed an equaliser as it would have been at the time – but sadly the shot was blocked and the chance was gone. 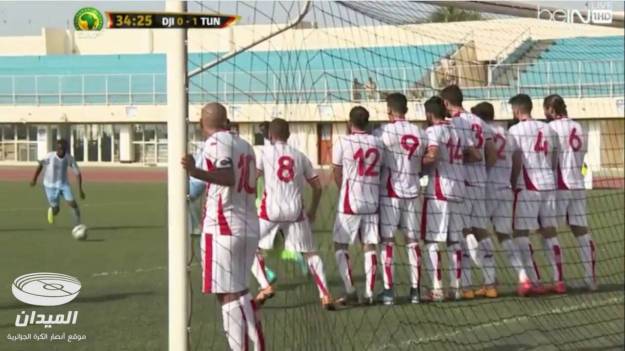 Tunisia sought a little more, but they were never going to enjoy the hatful they had scored in the reverse fixture last year when they put 8 past Djibouti at home. This win was sufficient to put them well within reach of the AFCON finals, although they must face Liberia in their final match knowing a defeat could see them eliminated should Djibouti fail to stop Togo picking up all three points in their match.

Liberia and Togo drew 2-2 a couple of days after Djibouti’s match, Togo grabbing a late equaliser to prevent Liberia sealing qualification with a game to spare.

For Djibouti, such heights are a far off dream, fading further and further from possibility.

The goals from Djibouti’s latest match can be seen here: